Ramp 34 can be a great spot to check when the bars aren’t very well lined up at Ego Beach.  Also, in a big South swell, the waves may have just a touch less size and more organization than sites further south.

Southwest winds will be cleaner if you head up a bit North, as you get clear of the town of Avon.  Northwest winds work here, too, but they’re very very offshore and usually very gusty and fluky on the inside.  North winds work reasonably well, too, but beware of lots of current.

Getting There: Use the park service parking lot and/or beach access ramp just north of Avon, labeled #34.  Follow all posted rules/laws!!

Check out the videos below to get a feel for some of the conditions you can find at Ramp 34:

If the East facing beaches get out of control in a big NE, head on down to Isabel’s. You’ll usually find a nice, clean wrap around swell, and fairly off shore wind, setting up some epic down the line port tack wavesailing!

The dunes are kind of high here, so expect a wind shadow close to shore. Also, beware the “Hatteras Express,” a free ride down to the Inlet in the 5+ knot littoral current that’s usually ripping down the beach. I usually use a bigger board than I think I need to help with getting out.

Trust me, the wave rides here can be so completely unreal, that it’s worth dealing with all of the hassle of getting through the shorepound and inside section!  So if you get denied, gather yourself up and try again and again and again…  it’s worth it!

At spots with super fluky offshore wind, like Isabel’s, I find that bearing way off the wind, but purposefully taking a very narrow grip on the boom helps to get you moving and out through the impact zone as fast as possible. 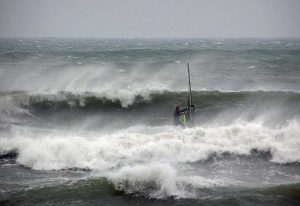 The narrow grip is to help you sheet in and out as you get hit by 20 degree wind shifts, and those pulses and lulls that often have a 15 knot wind speed difference, seemingly every few seconds…  Yikes!!

Getting There: Park in the soundside lot between Frisco and Hatteras Village. Use the walkway over the dunes. NOTE- You can also sail the soundside from this launch- especially in a NW, N, NE, or East wind. Beware of shallow spots, though… 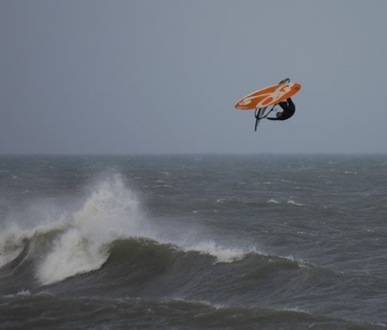 Want to try sailing the Ocean?  Ego beach can be a great spot to get your feet wet.  Wait for a SW afternoon with small swell, and when you get overpowered at the Hole, just carry your stuff up and over the dunes, and it’ll be perfect at Ego Beach!

North to NE winds work OK at Ego Beach, but you’ll encounter a ridiculous amount of current, so you’d probably be happier at The Lighthouse.  South to SW winds are really the preffered wind directions for Ego, offering side to side-off starboard tack conditions.

The shorebreak can be pretty big, so you might want to watch someone else get out to see how they time it.  Also, the wind is usually a little fluky on the inside, so it helps to grab a bigger board than you think you need.

The sandbars are constantly changing out there, so sometimes Ego Beach has a beautiful outer bar peeling away…  and other times it has nothing but massive shorebreak.  Take a look before you carry your stuff up and over the dunes to see if it’s the right spot for the day.  Sometimes it’ll be 1000x better just a few hundred yards up or down the beach, so use those high dunes as a lookout perch and pick your spot!

If you do go out at Ego, take a close look at the beach and the dune line before you go so that you can recognize where you launched from.  Sometimes it’s pretty hard to distinguish where home is once you get out on the water…  Luckily, you’re never further than 50 yards from the highway, so if you do get lost you can always go hitch a ride back to the Hole!

Getting There: Park at the Canadian Hole and carry your gear over the dunes. Use the paths, and adhere to any postings/closures.  Sometimes you can drive on the beach from Ramp 38, but it’s usually quicker and easier to just walk over the dunes from the Hole.

**All photos on this page are courtesy Andrew Scalia** 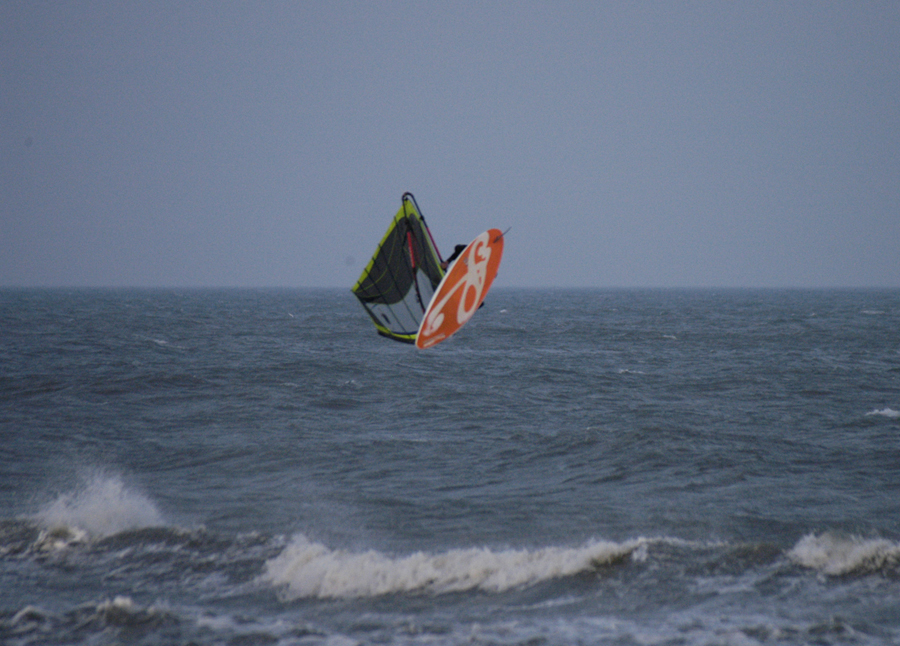 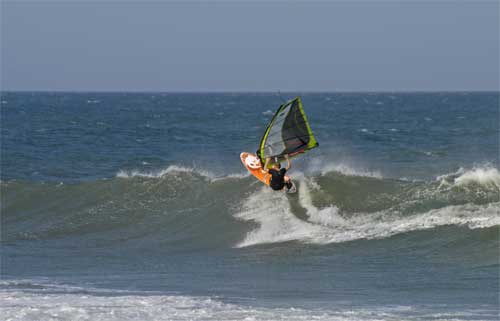 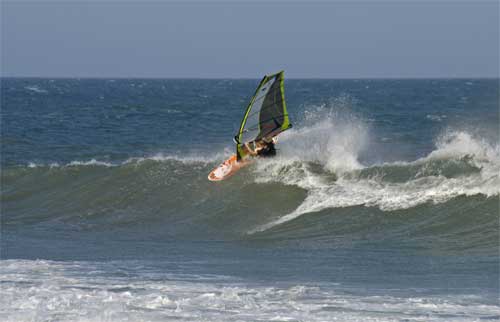 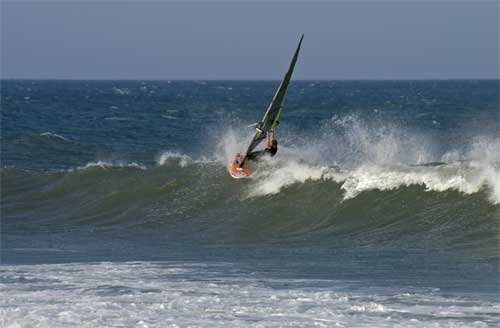 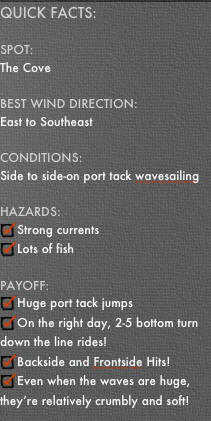 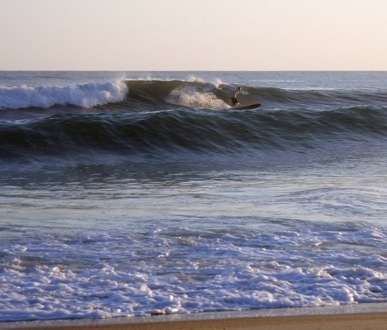 If the wind is East and you want to go wavesailing, the Cove is the place to be!! This place can be completely epic when it all lines up!! The perfect situation is a long period S or SE swell and East winds. These are pretty rare things… So the Cove only goes off a few times a year, and it only gets truly epic once every few years. But it’s always fun, even if it’s less than epic.

The wave tends to be pretty crumbly in the Cove, so big conditions usually aren’t as hair raising as similar size waves on our other beaches. The truly spectacular thing about the Cove is how the wave peels down the point, setting up seemingly endless lefthanders…. it’s something you’ve got to see to believe, and if you get the conditions while you’re here, you HAVE TO GO, because it might not happen for another 5 years!!

Getting There: Use Ramp 44 in Buxton and drive to the Point. 4×4 Only! Launch on the inside of the hook, off of the beaches facing more westerly/southerly. Adhere to all postings/closures/laws!! If access is closed down via 4×4/pedestrian use due to bird enclosures, or if you don’t have 4×4, it is possible to sail into The Cove from the Old Lifeguard Beach Parking Lot, but it is very dangerous and should not be attempted alone/without a plan/without support of some sort/without consulting someone with experience first!!! Basically, don’t do it, because you’ll probably die trying to get around the point and through the shoals. Here is the Ramp 44 entrance and Old Lifeguard Beach Parking Lot: Scroll south to see the Point and the Cove.

Here are some videos shot in The Cove:

Windsurfing 30+mph Winds in The Cove from Andy McKinney on Vimeo.

Fun Day at The Cove from Andy McKinney on Vimeo. 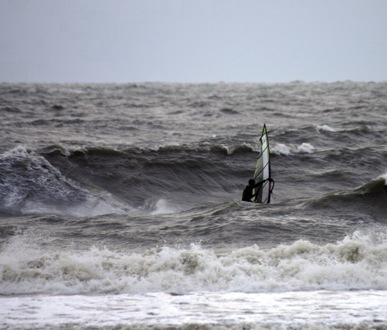 The Lighthouse serves up some of the heaviest waves on Hatteras Island.  It’s also pretty much the only East facing beach that works in a NNE to NE wind, thanks to the Jetty system that breaks down the littoral current.  Be careful- this is the kind of spot where a waist high wave will send you right down to the bottom, rag-dolling you and your gear along the sandbar.  I would bet that the Lighthouse has claimed more broken windsurfing gear than any other launch on the whole East Coast.

That said, when it’s good, and you’re on top of your game, this place can be sweet!  Expect 3-5 bottom turn waves reeling left off the Jetty, or some nice backside rides on the peak 50 yards south.  The wind is usually fluky on the inside, so use a bigger board and fin than you think you need, and use the wave to generate speed down the line.

Launch up near the Jetty, generally within 30 yards of it (on the downwind side).  The Jetty helps to break down some of the massive amounts of Littoral current that the east beaches see, but it also has it’s own issues- If you get too close to it, the current will suck you right upwind and slam you into the rusty, busted up chunks of metal (not good).  Also, the closer you get to it, the weirder the wind gets with lots of swirls and gusts and lulls.  And finally, all of the littoral current that was blocked on the inside gets accelerated and shot through the holes in the jetty and around the end of the jetty, so expect a few different current zones as you make your way off the beach.

If you’re getting worked and drifting half a mile down the beach, turn yourself around, head back to the beach, hike back upwind to the Jetty and start all over again.  You’ll make it out, eventually.

Be courteous to any surfers who may be in the water, even when it’s blowing 30.

Getting There: Park in the lot at the “Old Lighthouse Site.” Carry your gear over the dunes. Check it on the map- you can see the Jetty sticking out and the waves wrapping in:

Here are some videos shot at The Lighthouse:

Cold Weather Windsurfing at the Lighthouse from Andy McKinney on Vimeo.