…since I’ve had a boom in my hands…  The only reason I decided to count is because one of my calluses just fell off.  Hmm, time to suit up and deal with the cold, I guess!  Perhaps Frisco is the place to be: 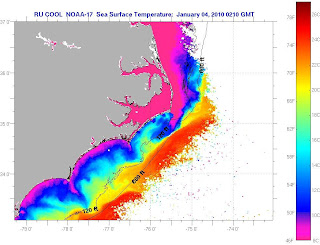 If you take a look at this map of Sea Surface Temperatures (obtained from marine.rutgers.edu) you’ll be able to see some pretty cool things going on.  Most obvious are the two different currents that meet off the shores of Hatteras Island- The (purple cold water) Labrador Current, and The (red warm water) Gulf Stream.  The Gulf Stream almost always sits tantalizingly close to our shores, but rarely pushes all the way in.  The Labrador Current, on the other hand, butts right up against the shore as it pushes down from the North.
Now, take a closer look at Hatteras and Ocracoke Inlet- They stand out as little plumes of (dark blue) cold water (from the purple sound) that jut into the warmer (teal blue) water of the ocean.  The wind has been WNW lately, which is evidenced by the shape and orientation of the plumes.  I’m not sure if the cold water plumes were completely driven by the wind, the tidal outflow from the sound, or most likely both factors working simultaneously.
Amazingly enough, though, the water along the southern beaches looks like it’s over 60 degrees, as long as you don’t get too close to the inlets.  That’s mighty tempting, especially compared to the 45 degree water (or less) found along the east facing beaches.
But the most interesting thing about those plumes of cold water?  When comparing their shape and location within the 60 degree water, one will notice that they form the eyes on a teal blue sock puppet.  Yay!