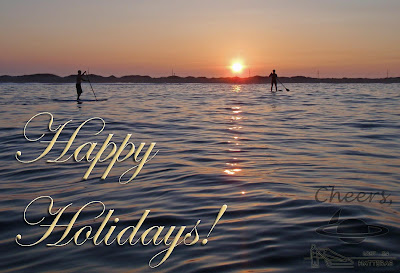 If you have some down time this Holiday Season, why not check out the latest edition of Windsurfer International?

Due West winds are the preferred direction for sailing the Buxton Slick.  Today, we had plenty!  Stuart and I sailed our 3.7s completely maxed out.  With that much wind, the Slick was no longer a slick.  In fact, there was so much extra water piled up (due to the strong winds) that only about 30% of the normal land mass was exposed…  leaving our normal stomping grounds a mess of micro-psycho-chop…

So we foraged further

The Venus Flytrap
Where the water is so smooth, and the wind so strong (and gusty) (and shifty) that the most routine endeavor becomes either effortless or impossible.  More often than not, my luck swayed to the impossible side of things!
Regardless, it was a pretty sick way to finish off my 2009 season!  Cheers, to an even windier 2010!!!!
Come along for the ride- here are 2 minutes of GoPro action, straight from this morning’s session:

Windsurfing “The Venus Flytrap” from Andy McKinney on Vimeo.

Repetition is key…  Stuart and I hit the Slick for the last 2 days, both days on 4.7.  The wind direction stayed basically the same for both days, too, so we had a chance to really dial in a “course” of ridiculously flat water.  And now, we’ve both got Grubby’s pretty confidently in the bag!  Stuart on both tacks, and I’m still stubbornly starboard…  I’m stoked, for sure.  And I owe Stuart a huge thanks for keeping the motivation up! 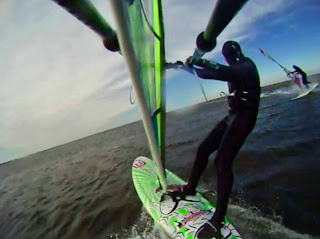 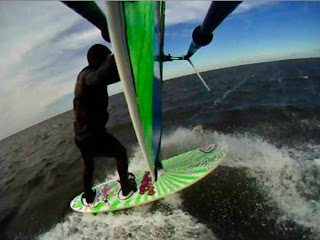 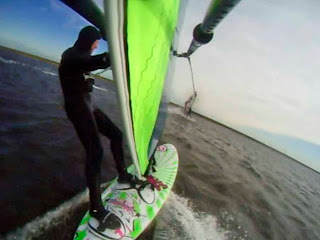 Stu (up ahead) halfway through… 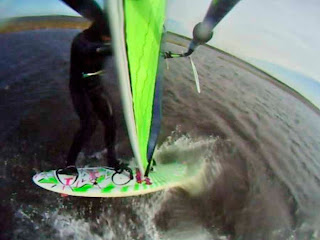 I know most of you guys only like to come during April and October, but Hatteras absolutely HOWLS the whole rest of the year (except August)….  For example, in the last 2 weeks, I’ve had 2×3.7 sessions, 2×4.2 sessions, 3×4.7 sessions, and 1×5.2 session.  And when the wind hasn’t blown, the surf has been super fun and glassy.  We definitely can’t complain!  Come join us for some fun!!

This video is long, but I think you’ll like it.  Gather up your friends, family, coworkers, neighbors, and pets.  Pour everyone some eggnog (but leave the rum out of Junior’s).  Load the video, and turn up the volume.  If you aren’t enjoying the action, then close your eyes and absorb Tchaikovsky’s soundtrack.  Enjoy!

Everyone please say “Thank You” to Ace, because without his generosity this video (or any of the last half dozen videos for that matter) wouldn’t exist!

Happy Holidays Everyone!  There’s still time to ship stuff out before Christmas, so shoot me a note if you’re in need of a windsurf board to put under the tree.

I hate to say it, but I think today’s 20 minute sunset session completely and utterly trumped yesterday’s all day long 3.7 warm sunny blowout.  Let’s go through a checklist to try to quantify.

So, by what quantifiable measure was tonight’s session even remotely better?  Well, none at all.  But sometimes you just can’t quantify the surprise of an unexpected sesh, the beauty of a setting sun, or the pure joy of experiencing the natural world while perfectly powered on a 4.7. 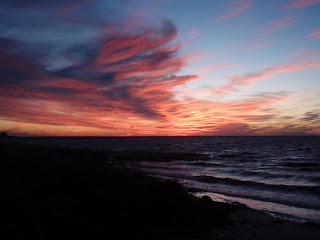 I forced myself to come in for 30 seconds to take this picture.  No more, no less.  Then it was right back out there for a few more blissful passes…

Wow, it has just been howling out here on Hatteras Island!  I was smart enough to grab Anne’s 3.7 today, and I’m glad I did because I ended up using it pretty much all day long.  George, Jim K, Dale, Donny, Mark S, Freddy, and I hit the Hole in the warm, summer like SW winds.  It’s tough to believe that it’s December when the thermometer reads 70F…  We are LUCKY!!  I took a bunch of video footage that I’ll work through eventually, but in the meantime, check out these pics that Dale sent in: 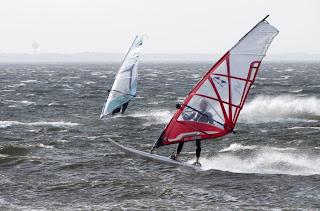 Jim K and Mark S, full speed ahead!  Jim gets the biggest sail award with his 4.0! 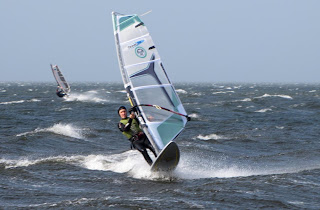 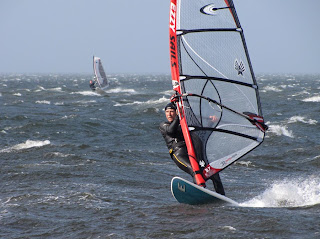 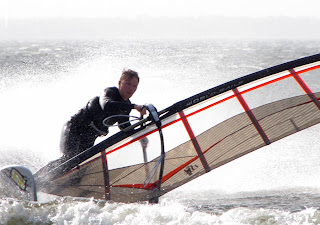 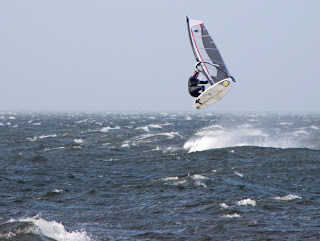 Mid-afternoon, I snuck down to Old Lifeguard Beach and sailed a 4.2 for about half an hour with Thomas, Charlie, Dan, and Lane.  The waves were super clean and had nice size, probably a touch overhead in the better sets.  Slight equipment malfunction cut the sesh short, but that’s alright as it was time to get Anne on the water!

With an hour of daylight left, I ran back to the Hole and re-rigged Anne’s 3.7 for her.  She showed up, tossed on her wetsuit, and charged on out into some seriously gusty winds.  After she had had her fill, I decided to let her in on a little secret- All of the other (190 pound) guys out in the water were on 3.7s too!  She just smiled and asked for a 3.2 for Christmas…

There is a forum thread on iWindsurf.com where Spennie recommends jibing with both feet out of the footstraps.  That is certainly an unconventional approach, but I know a few people who jibe this way.  I figured that I’d give it a try, and recorded the sesh for posterity and a few laughs at the inevitable crashes.  Check out the outcome:

No-Strap-Jibes from Andy McKinney on Vimeo.

I found it harder to control the rig because I was too close to the mast base to have any leverage over the sail.  It was fun to try, though, and I’ll certainly keep it in the ol’ bag of tricks.

Any other experiences?  Add your 2 cents to the iWindsurf forum thread!

It ended up blowing 4.7 all afternoon Thursday, so I spent a lot of time tuning up the 2010 Surge.  This sail is like a chameleon on the water depending on down and out haul combinations!  If anyone is looking for help getting a certain feel out of their World Sail please shoot me an email, but I’ve been really happy underdownhauling and adding a little extra outhaul for most applications.

Anyway, I tossed together a video from Wednesday’s Cove sesh!  Conditions were Super Freaking Windy out of the ESE, with fun waves in the chest to head high range.  Queue it up full screen, turn up the volume, grab a non-windsurfing co-worker, and press play:

Windsurfing 30+mph Winds in The Cove from Andy McKinney on Vimeo.

Everyone please say “Thank You” to Ace for loaning me his video camera!  I’m pretty sure he knows how sandy everything gets out here…

Something weird happened today.  I was blown off of my 4.2.  I couldn’t hang on, I could barely waterstart.  Bottom turns were manageable, but top turns were out of the question, unless you went one handed and flagged the sail.  Very weird, indeed.  My suspicions were confirmed upon checking the meters:  Frisco Pier was reading average 38 with gusts to 47 mph!  Yes, yes, it was FREAKING WINDY out there.

It’s all good, though, because we scored a sweet day in The Cove!  It wasn’t until the last hour that it went truly ballistic.  The waves were in the chest to head high range, and most people were on 4.2-4.7 or 6-8 meter kites all day long.  One thing is for sure: there are a lot of smiling, tired, sore bodies on this island tonight! 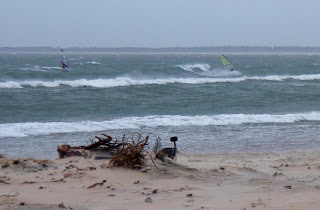 Keith bottom turns as Stuart sets up for the next wave

I took a bit of video from the beach, and tied on a GoPro while sailing too.  Here are a few frames from the clew mount camera to tide you over until I get a chance to edit the vid: 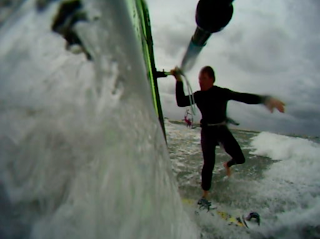 One handed one footed top turn…  And yes, I sailed away from it! 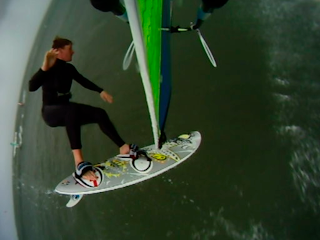 No handed back loop… And no, I did not sail away from it 🙂

There is a lot more wind in the forecast for tomorrow and this weekend too!!  Come on out and join us!

Thank goodness for iWindsurf.com!!  Today was one of those weird days where it blew 25-35 mph all day in Frisco, but barely touched 20 in the gusts for much of the day in Avon.  As the crow flies, these spots are only about 5 miles apart…  Without iWindsurf’s meters, I would have never guessed that Frisco was crankin’! 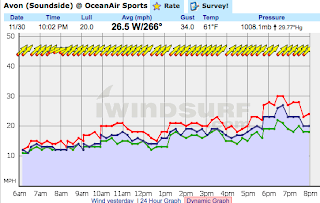 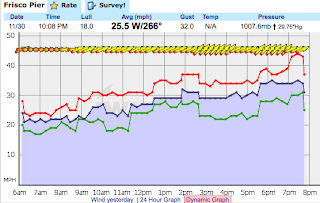 A bunch of us ended up sailing/kiting the Bathhouses in some super fun side onshore conditions.  Good jumping and fun waves in the head+ range made for a pretty sweet afternoon on the water.  Not to mention temps in the high 60s!  It’s tough to believe that it’s almost December already!  The only thing that kept me honest was the massive sideshore current, taking my power away right when I wanted it the most- right in the impact zone!

Sorry, no pictures, but think of Sylt, minus the freezing temperatures, a foot or two of wave height,  and thousands of cheering fans!

Looks like another massive storm event on Wednesday/Thursday!  Come on Down and JOIN US!!!!!