So Anne ended up doing really well at the OBX Marathon yesterday!  She ran the 26.2 miles in 4 hours 15 minutes 40 seconds, which is 30 minutes faster than her last marathon time!  It was one heck of a scene up there, with a total of almost 7,000 people running in the 8k, 1/2 marathon, and full marathon.  What an event!  Here is a little video showing the scene:

After we made it back to Avon, Drew, Stuart and I paddled out and caught some waves.  It’s been a really long time since I’ve surfed… It’s just been so dang windy!  Luckily, my first wave lined up perfectly, so I got a great ride, and built up some confidence for the rest of the sesh.  Laura and Anne stretched out on the beach and snapped a few pictures of the action: 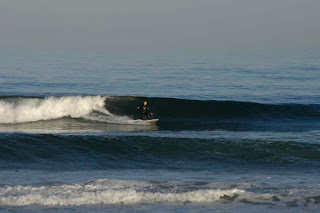 Drew posted quite a few more pics and a recap of the Marathon here.

Keep an eye on that forecast!  It looks like it’s going to get pretty crazy out here…  of course, you never know what you’re going to get until it actually happens, but some of the forecasts have been touching on 50+ knot winds and waves in the 8+ meter swell range…  Yikes!!  I doubt it’ll get that crazy, but I won’t be surprised if the road gets washed out.  I’d plan on being here by Wednesday afternoon or not at all.  Oh, and make sure you don’t have to be anywhere until next Tuesday, because that might be the first time you’ll be able to leave!

windguru.com forecast as of Sunday evening.  We don’t see that shade of purple all too often… 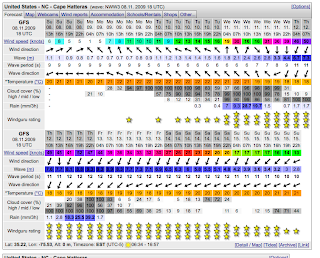