So Monday ended up being extra windy SW!!  After scouring the whole island, we ended up at Old Lifeguard Beach.  The timing was such that everyone showed up exactly at high tide when everything got weird…  The waves were doubling/tripling up, hard to read, voodoo chop inside, voodoo chop outside, the North swell instantly faded as the new South swell tried to take over…  Tough conditions to make anything happen, to say the least…  But everyone tried their best and did a great job out there!

Luckily, once the tide switched around and started pulling back out, everything reorganized.  Just in time to rig down to a 4.2!!  Even then I got yanked over the front while trying to drive down the line on a few waves…  man that wind was punchy!  Anyway, the sunset sesh was sweet, to say the least!  I don’t know that I’ve ever seen a bigger, redder, sun make contact with the dunes…  It was very distracting…

Bill posted up a bunch of great pictures on OBX Beach Life (Thanks for shooting, Keith and Martine).  Hint- if you click on a picture, a slideshow comes up, with captions.

While rigging, I snapped a few pics too: 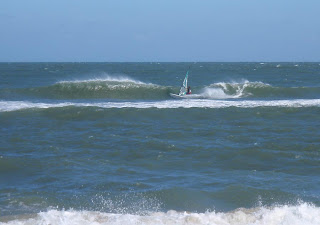 Caleb, lining it up… 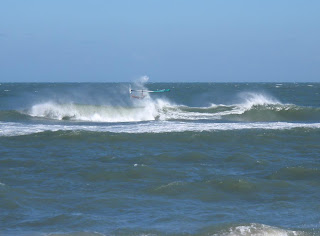 …And smacking it!  (or getting smacked?)

I also tied on the ol’ boom cam.  I’ve had a bunch of requests for pictures of the GoPro Wide setup that I’ve been using, so here y’all go: 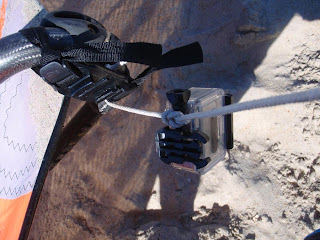 Put a safety knot in the straps (around the boom), and use the extra outhaul to tie a safety line around the camera itself. 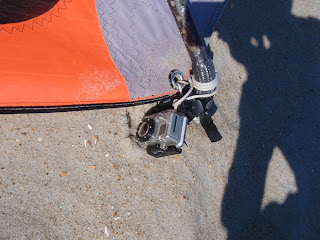 Tie it up as snugly as possible, and angle the camera down towards the mast base for best results.  In the camera menu, set the record mode to “upd” (upside down) since the camera is hanging upside down from the boom.

And here’s what I got for video from the early sesh, on a 5.0 with the weird high tide waves.  When am I going to learn to save the batteries for the real deal footage???  Oh well, something’s better than nothing, right? 🙂  Enjoy!