Sorry to leave ya hangin’ there for a few days, folks. We’ve had some great surf, and wind to boot for the last 3 or 4 days now. Gotta love it, just wish that warm water would push itself in already!! Not that 50 degrees is all that bad, just gotta put on the boots and hood, that’s all. 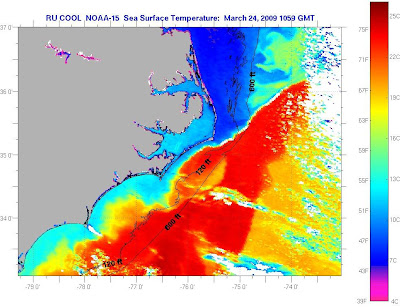 Sea Surface temperature, courtesy of the marine.rutgers.edu website. That 70 degree water is SO CLOSE!!

Stuart, Brian and I took a nice long downwinder yesterday, from Askin’s Creek to the Lighthouse (about 4 miles). The buoy was reading 7 ft at 12 seconds which produced the occasional logo high set, but it was mostly about head high, and kind junky but fun in the sideshore wind. The wind actually backed off quite a bit while we were out there, to the point where Stuart and I were schlogging probably 60% of the time. But every now and then a puff would roll through, and set you up for some awesome action!

My only moment of glory was caught on one of those puffs, where I was barely able to eak onto a plane. I was headed out, while there was a big set looming and Brian was coming in on the biggest one. There was definitely the moment of decision: To Chicken Jibe, or Charge? Well, you know me, of course I decided to charge it. Pumping my butt off, I was able to pick up speed as this logo high wall was starting to pitch in front of me. Brian let out a hoot as I whizzed past him about 10 feet upwind. Man, did I launch into a huge backloop! There’s nothing quite like hitting a 10 or 12 foot vertical face going just as fast as you possibly can!! I swear, I ended up flying higher than Brian’s kite! Hahaha! Of course, I botched the landing, but it was still plenty of fun…

It’s windy again today… Stuart and I have plans to try and snap off some photos for y’all, I know I’ve been slacking on ’em… Oh, and check out this Sunday’s forecast!! Could be time to load up the car and take that first road trip of the Spring, folks!

Also- Surfrider Foundation has composed a pretty reasonable petition concerning Off Road Vehicle access on Cape Hatteras. Read their overview here (and check out that picture of the Cove GOING OFF!!). If you agree with their stance, sign the petition here.