Stuart and I got in the water and went for a surf this afternoon. It’s been a long time since I paddled around, due to how much wind we’ve had lately…. Definitely felt out of surfing shape! Which wasn’t too good because because it ended up being pretty big out there. The buoy was reading about 5 ft at 11 seconds, which doesn’t sound like much, but I’ll tell ya, around here that ends up being some pretty good sized surf.

The lineup was pretty crowded out there today… Lots of local boys… As in, dolphin! They were everywhere, dropping in on waves, jumping around… It was a pretty cool spectacle, with the clear blue water, sunshine, and pretty glassy overhead waves rolling through. Gotta love it! It did feel like a pack of wave hungry surfers out there, though- At one point there were about 5 or 10 circling around me and catching waves. I saw a set approaching and started paddling for the outside, flanked on all sides by dolphin. A few of them turned and burned on the first wave, but I could see the second wave jacking up way outside, so I kept scratching out. Made it just far enough to pivot around and take a super late drop on this macking wave! I didn’t have a chance to look up and see how big it was, though, because I was busy watching all the dolphin scatter out from in front of me as I was careening down this huge glassy face… By the time I kicked out over the shoulder and started paddling back out, the next wave was bearing down and I could see 3 or 4 dolphin dropping into that one, a few of them punching through the surface and catching some air… What a sight!!

Speaking of sights- I watched Staurt catch some big ones today, too. He was charging, for sure! It was inspiring, and… uhhh, well… entertaining! I wish I had brought my camera out there… He caught this one set wave, and just kind of shot way out into the flats in front of it, while it was heaving this thick lip behind him. Somehow, I have no idea how, but he started to get pulled back into the wave and somehow cleared the lip and got back onto the face. At this point, he just kind of stood there, as the whole thing folded over the top of him and clipped him right in the head, sending him cartwheeling down to the bottom!! Hahaha! I’m laughing, but I’ll tell ya, his eyes were pretty wide by the time he resurfaced! Nice work out there, Stu! Way to get on it!

Anyway, wish I had some pics for ya… but I’ve got the sights burned into the ol’ memory banks, so if I ever take up painting I’ll recreate them for y’all… Ahh what the heck- here’s my best attempt at drawing Stu right before his head got taken off: 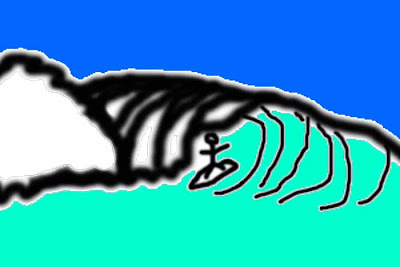 As I write, that North wind is starting to rattle the windows again… Should be a heavy day at the Lighthouse tomorrow… See ya out there!