Spring is here, folks!! Stuart and I sailed logo high sets at Ego Beach yesterday afternoon in warm (but light) SW winds. The swell was running the wrong direction on the outer bar, but you could line up one or two good hits before it would closeout. And let me tell you, the shorebreak was “difficult.” But once out, it was plenty of fun 5.7/85 liter. 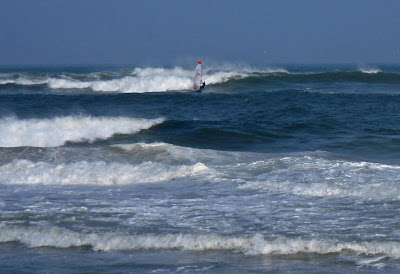 Stuart, in front of a set(Anne pic) 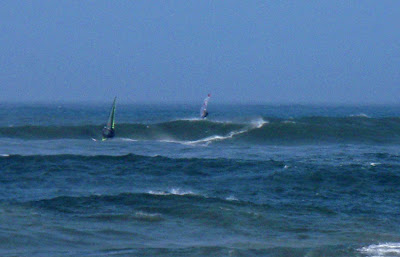 Moi, driving down the line(Anne pic)

Anne showed up after a little bit, so we crossed over and joined her at the Hole for the remainder of the evening. Had a fun little freestyle sesh, and everyone nailed some sick stuff!! Stuart almost nabbed a Grubby- the first 3/4 was perfect, he just kinda botched the sailing away part. But the big news is that Anne destroyed her first duck jibe!! She couldn’t have done it better, planed out and everything!! Siiiiick!!

So here’s the situation- Anne’s perfect duck jibe was nailed on about the 10th attempt she’s ever made. Anne’s been sailing for under 3 years, and only about 15-30 days a year. She’s a great athlete, but the unique thing about her quick progression lies in 2 factors-

1) She takes lessons (from local instructors like Stuart and I, and ABK Camps as well)
2) She sails on good, modern gear

While we’re on the topic, I’m planning on making myself MUCH more available for lessons this year- so shoot me a note or swing by the shop and get yourself signed up! Windsurfing’s pretty danged fun, but it’s even more fun when you get better at it!!

Cranking NE is on the charts for the next… umm… forever! See ya out there!!