Another solid day out here on Maui! The way outer reef at Kanaha Uppers was breaking at well over mast high during the big sets! The regular inside reef was a bit confused but still really fun and maybe logo high if you found the right nugget. Goooood stuff, and really not that challenging or punishing, despite the size… Just fun sailing!! 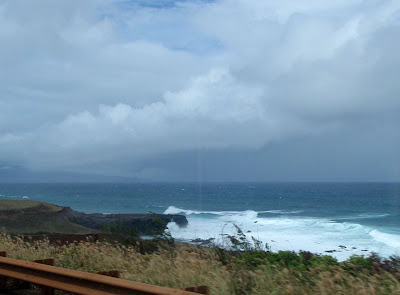 Looking downwind at an empty Ho’okipa

I didn’t see anyone out at Ho’okipa when I drove by, both in the am and pm. I watched for a while, and there was plenty of time between the sets, but most of the big ones were closing out the whole stretch, all the way down to Lanes. I hear that most of the pros went over to the Westside somewhere, where the wind was super offshore and the waves were massive. I’m sure it was pretty insane, I would’ve loved to join them… or maybe just snap off a few pictures from the beach 🙂

Thoughts on today’s gear: (Well powered on the Manic 4.5 again, this time I sailed the Tabou 3S 76 and the Pocket 75 head to head)

So, I’ve been super impressed with the Tabou line. The 3S 76 that I rode today handled the psycho chop and big waves impressively well. It was really just a super early planer, with lots of speed and great pop for big jumps. It even handled those mast high waves pretty danged well… It wasn’t super snappy off the lip like the pockets, but it had a real nice feel in the bottom turns and kept it’s speed up without needing too much input. Definitely seems like a no brainer go-to board for general high wind blasting, jumping, trickery, and forgiving wave sailing. Two thumbs up for ease of use and radical accessibility!

And the Pocket 75… Man, I might have to sneak that thing onto the plane when I go home! What a beautifully responsive, fast, snappy, forgiving platform to ride waves on! The Pocket planes up super early for it’s size, yet remains easily in control on the biggest, steepest wave face you’d really want to get yourself onto… The rails are very trustworthy in the turns, and it’s got a real nice balance and pop when hitting the lip. I Really Like This Board!! 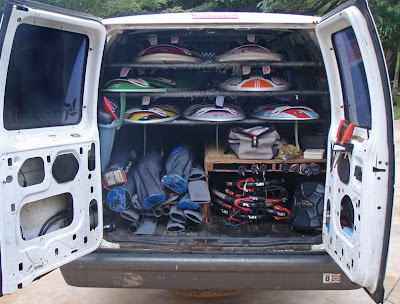 The van, chock full of goodies- 7 boards, 10 sails, 9 masts, 8 booms, and enough bananas to feed a troop of monkeys

Up next- some of the bigger 3S models, a Rocket or two, the Da Curves, and (if there’s time) some Freestyle action (but I already know how rad that board is).

I’m also getting a great feel for the Gaastra Manic line. Lots of stability, great speed and easy handling. It’s got a very light feel in the hands, even when overpowered. Two thumbs up! I’ve still got a pile of Poisons, Echos, Remedys and Vapors to try out, too… Busy busy busy!! It’s a good thing all this testing is fun (I mean really here, I’m seeing how well the 3S rail holds while driving down the line on a mast high wave!!!)… Otherwise, it wouldn’t seem like much of a vacation…