…because it won’t freeze until it gets really cold outside…

While the guys in Maui are stepping up to the plate, and facing over mast high waves in punchy Kona winds, the least I can do is go for a sail at the Canadian Hole in arctic temps… My sesh had it’s own challenges, albeit nowhere near as daunting as what the Maui pros were dealing with! Those guys are frickin’ rock stars!! (if you haven’t seen the recent conditions in Maui, each of the above links are worth a click)

Yesterday, before heading out, I wrote a short guide to windsurfing in cold weather. I followed every one of my own suggestions, except for numbers 2, 3, and 5. It ended up being a great session, a bit over an hour long before the wind faded out. No problems with the cold at all, my hands, feet, head and body were warm the whole time! Medium power 5.7 on the Tabou 100. The air was 26F (-3C), and the water was less than or equal to 41F (5C), which adds up to a maximum combined 67 if you’re using the formula for the 100 degree rule. Perfect freestyle windsurfing weather! 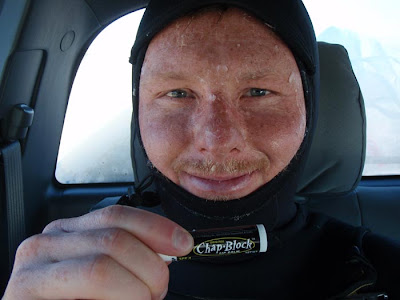 I forgot the vaseline, but chapstick works equally well in a pinch. It is unbelievable how much it helps in the ice cream headache department! 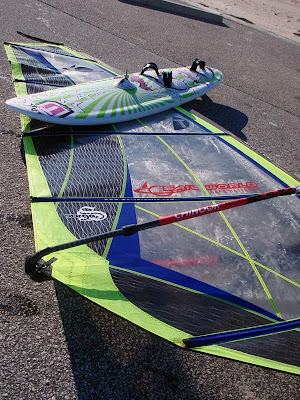 Here’s my kit after the sesh. That sail window isn’t dirty, it’s frozen over with ice! An interesting side note is the condition of the sail- it has close to 100 days of use, and still looks virtually new! Anyone who’s ever sailed with me knows that I don’t baby my gear, either… Way to go, World Sails!

Here’s a closeup of the ice: 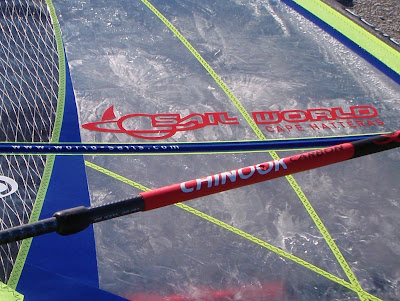 It’s a good thing it was a solo sesh, because I couldn’t see a darned thing to leeward! 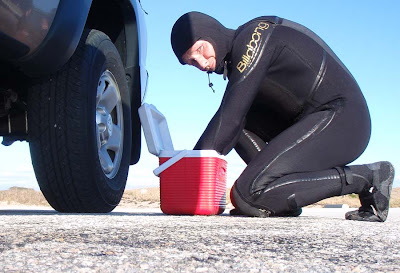 I did bring the portable hot tub, which was one of very few good decisions I made yesterday. My hands were fine while sailing, but rolling up the iced over sail immediately froze my fingers and palms. Another interesting side note- apparently an hour of below-freezing sailing, a tightly cinched wetsuit hood, and chapstick all over your face makes you appear 20 years older than you actually are.