***Update*** I just uploaded the Buxton Slick video, it’s at the bottom of this post…

****Update #2**** The Island Free Press has posted an informative news item about the beached sailboat, here. Apparently, this isn’t the first time this boat has been in trouble…

Big news in Avon this weekend! Some fella from up North ran his 50 foot sailboat aground across the street from the Food Lion. Rumor is, he went below deck and mistakenly fell asleep while underway… Doh! No one got hurt, and his boat seems kinda OK, so everyone’s just laughing about the whole thing. He’s pretty lucky that the swell isn’t very big right now, and that he missed the Pier (by about a half a mile). Word is, they’re going to try to pull him out tomorrow morning at high tide. I wish them luck, because if they fail, there’s another big blow forecasted for Tuesday and Wednesday…. Drew has some great pics from last night’s rescue mission here. 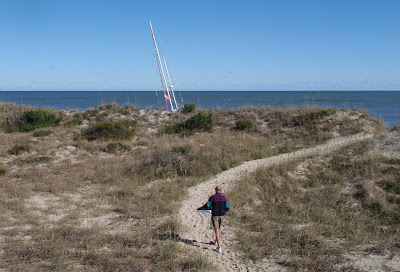 Nino’s delivered a Pizza to him! 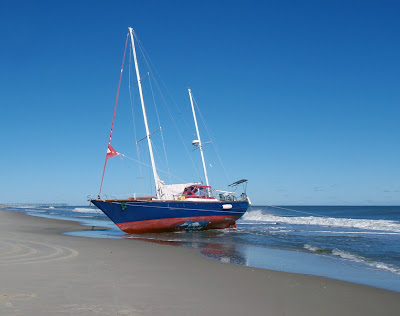 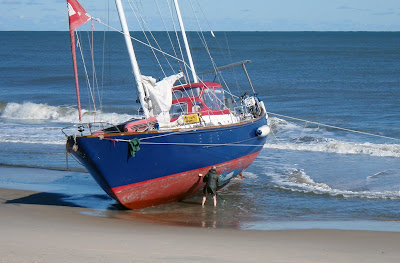 Might as well clean the hull while she’s dry docked…?!?!

It’s been a super windy weekend! It cranked out of the South all day yesterday, with temps in the 70s and occasional showers. I snagged a dawn and sunset session, both of which were kinda lame performances on my part. I was up way too late Friday night, so my energy level was terrible for the dawn sesh. I still had a great time, and nailed a few loops and spocks and stuff, but was definitely dragging out there. Then, at work, Drew brought in a bunch of leftover brownies, and then Anne showed up with a box of Krispy Kreme doughnuts that she bought for a fundraiser… So all I ate all day was sweets, and then I tried for the sunset sesh… Needless to say, I had ZERO energy… I’m usually pretty careful about what I eat, but man, yesterday was just terrible…

From what I hear, Ego Beach lit up pretty well in the afternoon, about chest high on the newly formed outer bar. Hope fully that sandbar stays put for a few swells, because it looks pretty well shaped. This was the scene when I showed up: 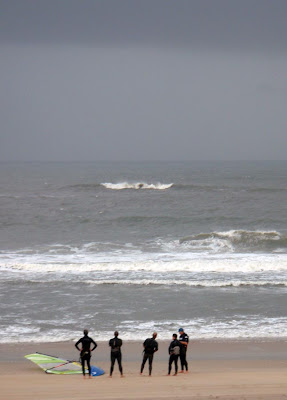 Whole lotta standing around going on

So yeah, the wind died off, and the tide got too high. Luckily, the sound is right across the street! There were quite a few people out there, who had come down for the weekend forecast. They definitely scored a sweet day!

This morning was cranking NW and a bit chillier. Anne, Stuart and I sailed down in the Buxton Slicks. Anne tried out her new 3.7 World Sail Surge, and claims “It’s GREAT!” Stuart was on fire this morning, nailing spocks on BOTH tacks now!! Solid performance! And I, well, yeah… I wasn’t really feeling it this morning… Oh well, it was still super fun! I took the camera out there again and shot some video. Enjoy!!

The forecast for this coming week looks INSANE, AGAIN! This Fall has just been incredible! If you’re not here, GET here, ‘cuz it’s gonna be good!